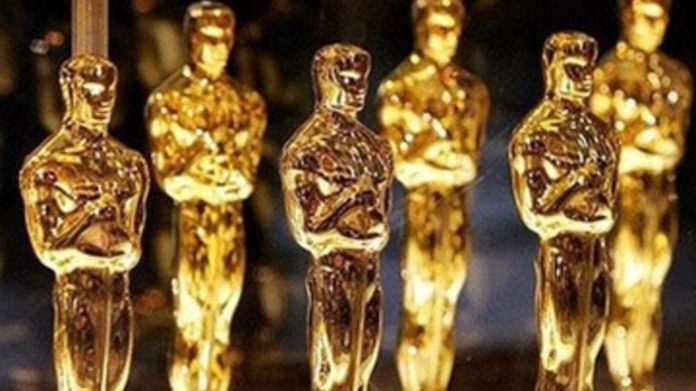 Leonardo DiCaprio nearly broke the internet when he finally won an Oscar in 2016: The announcement was the most-tweeted minute of an Oscars broadcast ever, with 440,000 tweets per minute. Whether someone in this year’s telecast tops Leo’s history-making moment remains to be seen, but social media is a brand’s best bet to win big during awards season.

While TV viewership declined year over year for 2016’s biggest awards show, social media engagement increased. For instance, Twitter impressions and Facebook interactions around the Oscars jumped 5 percent and 15 percent, respectively. Despite the low TV ratings and audience fragmentation, networks are still commanding an eyebrow-raising $2.1 million for a 30-second TV spot. Your efforts would be better spent on social advertising—to tap into the buzz around awards shows and avoid “spray and pray” marketing.

The 2016 Academy Awards drew 34.4 million viewers. To reach the same audience size of 18+ adults on a social platform, your brand could spend 10 percent of the cost of a television commercial. To reach a more targeted audience via social—18+ adults definitely interested in awards programming (hello, login data)—you’d spend not even 20 percent of the TV price tag. If the enhanced targeting and efficient costs of paid social weren’t enough to convince you: You’d be reaching the many second-screeners during awards shows since 80 percent of social media time is spent on mobile.

A show-stopping social media strategy takes careful planning and execution. Twitter and Snapchat are real-time platforms where brands should focus on the day of and days following awards programs to tap into conversations. Facebook and Instagram are key post-event destinations for highlights and recaps.

Now that both the Oscars nominees have been announced, plan your messaging around the actors and movies that will resonate most with your target audience. If you’ve already shelled out millions for a TV spot, what’s another $200,000? Incremental spend on social is a must. Maintain brand consistency across channels to have one cohesive message and use social as an extension of advertising efforts.

Be sure to design creative with the mobile experience in mind since viewers will likely be engaging with social media on their smartphones. That means vertical video, (even) shorter attention spans and sound-off for Facebook and Instagram.

As with any prime-time event, there will be more competition in the market during awards season. Be ready to bid aggressively and focus on engagement rates to optimize ad spend toward the best possible performance. Stand out by leveraging newer ad products: formats like Twitter’s Conversational Ads and Facebook’s Canvas Ads give users unique ways to interact with your brand.

‘Incremental spend on social is a must. Maintain brand consistency across channels to have one cohesive message and use social as an extension of advertising efforts.’

Video conversational ads, which drive earned impressions, include a call-to-action button with customizable hashtags that prompt engagement. When users tap the CTA, a pre-populated brand message with accompanying creative and hashtag buttons opens and they have the option to personalize the tweet before sharing it with followers. Canvas Ads, designed specifically for mobile, provide a full-screen, immersive way for Facebook users to experience your brand’s story or learn about product offerings. Overall, highly visual creative is a surefire way to grab attention in a cluttered feed.

Reach second-screeners on mobile through keyword targeting (as well as event targeting for Twitter). This will ensure your brand joins relevant, real-time chatter about the Oscars as the show unfolds. Also target social media users who have watched past awards shows using Datalogix’s TV categories. Separate customers and non-customers into different groups and tailor creative accordingly. You’re able to customize audiences from your CRM list on the five major platforms: Facebook, Instagram, Snapchat, Pinterest and Twitter.

Video is a key component of a successful social strategy. Red carpet interviews, live performances and acceptance speeches drive the excitement around awards shows, so people will naturally look for video content on social channels. Extend your marketing campaign beyond the day of broadcasts to maximize reach. Oscar-related video viewing on Facebook alone jumps significantly the day after the show: in 2015, it rose 72 percent globally. Optimize ad delivery across both Facebook and Instagram to drive cost-efficient, incremental reach of your target audience.

On Snapchat, you can use Snap Ads—completely viewable, full-screen videos—to reach an audience of 150 million daily active users, including highly-engaged millennials. Tell a story with short, concise video that speaks to your target audience on the platform. Many Snapchatters will be posting about their viewing parties and following their favorite celebs’ Stories for behind-the-scenes access to the festivities.

And Snap Ads between Stories will allow your brand to become a part of the awards show experience. Attachments like long-form video and Web Views add more dimension to your storytelling efforts by enabling users to engage with additional video content or a pre-loaded mobile site without ever leaving the Snapchat app. Tap into Snap Lifestyle Categories to target the right users based on how they engage with the platform—reach movie and music fans, etc.

On Jan. 24, the Academy announced Oscar nominations via digital platforms for the first time. If a 90-year-old Hollywood institution can evolve with the changing times and appeal to a wider audience, so can your brand. Though TV viewership continues to slump, brands can reach fragmented consumers and drive the most impactful, measurable engagement through social media advertising.